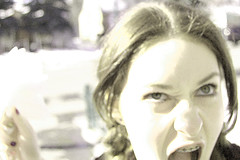 I have heard and read Christians make some very harsh, mean, and cruel statements as they strive to defend the truth against error. Sadly, in the heat of a discussion even we Christians can get downright nasty with each other if we’re not careful. We can forget that God told us to restore others with gentleness (Galatians 6:1). We can forget that the servant of God is not to be quarrelsome but rather correct our opponents with gentleness (II Timothy 2:23-25). We can forget that we are to speak the truth in love (Ephesians 4:15). Instead we seem to think we can speak hatefully, cruelly, spitefully, condescendingly, and mockingly but we are still being gentle and loving because our words were the truth. That is just not so. If we are directed to speak the truth in love, that means it is possible to speak truth but not do so in a loving way.

Please do not misunderstand me. I’m not saying sin must not be rebuked. I’m also not saying there is never a place for sternness and firmness. I am saying that no matter what the situation, we are to be gentle and loving.

However, when some are accused of violating these principles, they will often turn to Galatians 2:11-14. “See, Paul withstood Peter to his face. I can do the same.” Yes, Paul withstood Peter to his face, but does this mean Paul was harsh or cruel? Does this mean Paul yelled at Peter, belittled him, called him names, and held his error against him for the rest of his life? It doesn’t mean any of those things and it doesn’t justify any of those things.

Regrettably, I fear we may read our own emotions and actions into Galatians 2:11. The text says Paul withstood or opposed Peter to his face. Too many of us picture this as Paul getting up in Peter’s face with finger wagging and voice raised. We read anger, wrath, and vehemence into this passage. That is what we read into it. It is not what is there. The word translated “withstood” or “opposed” means “resisted.” It doesn’t mean that he yelled. It doesn’t mean he got up in Peter’s face. It simply means he stood against Peter. He didn’t go along with Peter but resisted Peter’s actions. He did that to Peter’s face, not behind his back. He didn’t hide his opposition to Peter. Being opposed to someone or something doesn’t mean being cruel to them.

Further, take a look at how Paul actually withstood or opposed Peter. Did he say, “What’s wrong with you, Peter, you stinking hypocrite?” Did he make all kinds of accusations or call Peter names? Did he even chastise Peter for not holding the proper standard? Actually, he asked Peter a question. He prompted and provoked Peter’s thinking. He asked, “If you though a Jew, live like a Gentile and not like a Jew, how can you force the Gentiles to live like Jews?” (Galatians 2:14).