Be Careful with “The Slippery Slope” 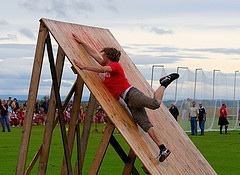 There is a Bible passage that is causing me to think this kind of argumentation just isn’t biblical. Rather, it may simply be the last effort of those who don’t really have a biblical case to make.

Read Luke 6:1-5. Jesus’ disciples were plucking heads of grain, sifting the chaff out by rubbing it in their hands, and eating it. The rub (pardon the pun) was this was all happening on the Sabbath. We know the Sabbath law. They weren’t to do any work on the Sabbath day (Exodus 20:9-10). The question was, were the disciples working?

The facts: 1) if a farmer went out and harvested his field or sifted the chaff on the Sabbath, he would have been sinning and 2) the Lord of the Sabbath said what the disciples were doing was not sinning.

They might even say, “Well, we’re not really sure if just plucking one is wrong, but isn’t it better to be on the safe side? Nobody can pluck even one grain on the Sabbath.” Hey, I know I’ve used this kind of argument myself. The problem is, it just doesn’t hold up in Luke 6 because Jesus is there to say that plucking a few heads of grain and rubbing it in their hands wasn’t working and wasn’t a violation of the Sabbath law. He should know. He’s Lord of the Sabbath.

Luke 6:1-5 demonstrates that there may be two very similar actions and one is lawful, while the other is unlawful.

I’ll share what my struggle with this is. I’m a very black and white person. I don’t like gray areas. I don’t like claiming something is a matter of judgment. I want a rule for every situation that clearly states what I’m allowed or not allowed to do. I don’t really want to have to think about it or discuss it or debate it and then still be a little bit up in the air.

But in Luke 6:1-5 we know that the disciples were not violating the Sabbath law by plucking a few grains and sifting the chaff in their hands. We know they would have violated the law if they harvested the field. When would they have crossed the line? Is the line an amount? Or is the line a motivation? Is it possible that someone else may have come out and only plucked a few heads of grain and have been violating the law? I just don’t know when the line would be crossed, which means there is a bit of personal judgment each of us must make in this scenario. Further, we also learn that we aren’t allowed to establish a rule for everyone based on our personal line.

Let’s use a modern day example. What about modest dress? The Bible rebukes lasciviousness, licentiousness, or sensuality (Romans 13:13; 2 Corinthians 12:21; Galatians 5:19; et al). Lasciviousness is that which promotes, stimulates, expresses, or invites sexual feelings and actions. However, the Bible never spells out all the lines of what is sensuality in regard to our dress. I have no doubt that a woman walking around men other than her husband in a bikini is being lascivious and sensual. But what if she wears a shirt that doesn’t have sleeves? Or what if she wears a skirt that comes just above her knees when she sits down? I have my personal lines that I enforce in my family, but can I enforce those rules on everyone? I know that some brethren are like me. They want to find some kind of line to remove all manner of judgment or potential gray area here. But I can’t find such a line in scripture. Knowing exactly where that line is crossed is not laid out in scripture. In fact, I’m not convinced the line is completely a matter of length. Sometimes it is a matter of motivation. One woman may wear a skirt that comes just below her knees but is striving to stimulate someone else sexually because of her shapely lower legs. Another woman may wear the same skirt in the attempt to hide sexuality by covering her upper legs. Both might be wearing the exact same skirt and it be lasciviousness for one and not the other.

Perhaps there is a valid place for saying “slippery slope.” However, I think we need to be cautious. I definitely think we need some personal humility about our own judgments instead of thinking our view of the slippery slope suddenly translates into rules for everyone else and all the other congregations. If we aren’t careful, we may find that we are on a slippery slope ourselves.